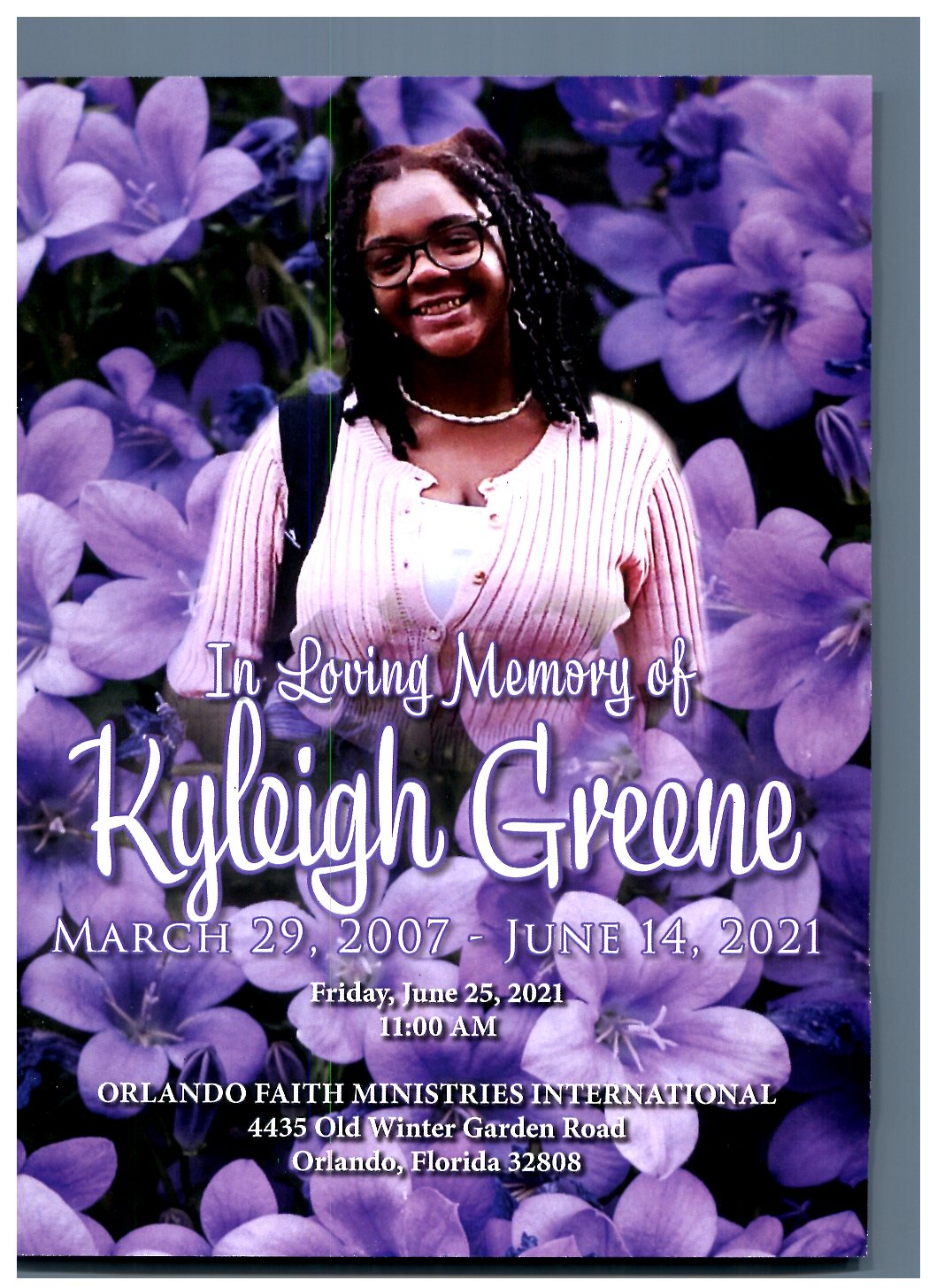 On March 29 in the year 2007, a Princess was born in the land of Orlando at the enchanted Winnie Palmer Hospital.   Her father, Prince Karres Malcolm Greene, was rushed to the hospital by Queen Veronica so that they could get a glimpse of the newborn baby.  They named her Kyleigh Madison Greene so that she shared the same initials as her father.  Queen Veronica and King William (Bill) Greene were the happiest Grandparents in the Land.  The Princess was SO LOVED.

Princess Kyleigh attended pre-kindergarten and Kindergarten at Lake Gem Elementary School in Orlando, Florida.   Queen Veronica diligently watched over the Princess, attending field trips and meeting with her after school.  Her Aunt, Duchess Olympia White, shared lunch with Princess Kyleigh every Thursday.   The Princess was SO LOVED.

When Princess Kyleigh turned one, Prince Karres met his true love,  Princess Valerie Love.  When they married, Princess Kyleigh danced and blew bubbles at the wedding. In first grade, Princess Kyleigh moved to Jacksonville, Florida, to live with Karres, Valerie, and her sister Princess Cydney Love-Howard.  The Princess was SO HAPPY.

Princess Kyleigh attended Bartram Springs Elementary School in Jacksonville, Florida.  Kyleigh was highly intelligent and made the A-B honor every year at Bartram.  She was even asked to speak at her 5th-grade graduation ceremony.  Princess Kyleigh participated in Choir and played the guitar.  She volunteered as the library assistant in the mornings before school.  She was actively involved in the Drama Club and was a pirate in the school’s production of Peter Pan, Jr.  The Princess played Soccer with Amenity for six seasons. Her team went undefeated in her final season. The Princess was SO OUTGOING.

Princess Kyleigh attended middle school at Lavilla School of the Arts, where she studied Drama.  She performed in the school’s rendition of The Little Mermaid Jr.   Kyleigh loved musical theater, and some of her favorite plays were “Dear John Hanson” and “Hamilton.”   In the summer of 2019, Princess Kyleigh attended a live performance of Hamilton in Chicago. In eighth grade, Princess Kyleigh was Vice President of her Thespian group and the director of an MTV musical skit.  Princess Kyleigh was preparing to attend Atlantic Coast High School in the fall. She was so excited.  She tried out and made the Junior Varsity Cheerleading Squad. She was SO TALENTED!

Princess Kyleigh loved the Lord.  She attended Freedom Church in Jacksonville, Florida, led by Pastor Phillip Rawls. Her Youth Pastor was Pastor Wenchell Aurelien.  Kyleigh was actively involved and loved to help her “Nana” with the children’s church ministry.  She was SO BLESSED. In her free time, Princess Kyleigh loved to bake sweets and dance.  She loved to make tic tok videos and kept a video diary about various subjects.  She also loved to travel to faraway lands and has visited several states and even the Bahamas. She was SO Full of life!

Princess Kyleigh now reigns with the King of Kings and Lord of Lords!!