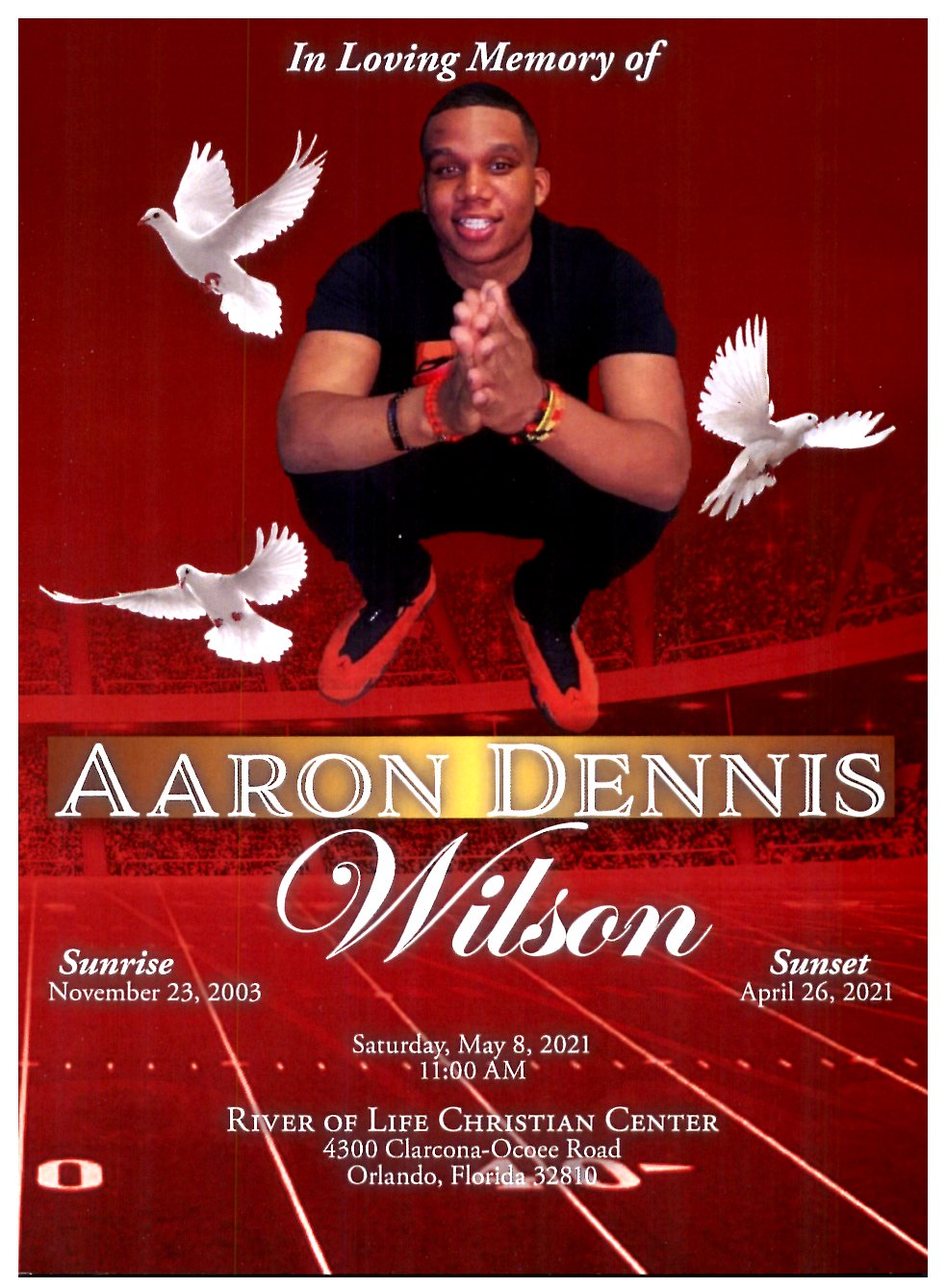 Aaron Dennis Wilson was born November 23, 2003, in Greensboro, NC, to Arthur Wilson, III & Rasheda Mayse.  He moved to Charlotte, where he attended the local schools. From a young age, Aaron was a smart little boy with a great sense of humor who loved his nana’s oatmeal and refused to eat anyone else’s until he was old enough to make it himself. While in Charlotte, he participated in Karate, football, basketball and was a member of Boy Scout Troop #7. He later moved to Florida, where he continued to flourish. He began to excel academically and was placed in Honors classes. Aaron began to play youth football under his dad’s coaching for the West Orange Jr. Warriors of Winter Garden, where he immediately showed a natural ability to excel on the field. He helped lead his team to several playoff games each year and was a Heisman Trophy nominee in 2016, the first defensive player to ever be nominated. As an 8th grader, he was selected by Hall of Famer Deion Sanders to play in the Under Armour All-American Middle School game and played under former Baltimore Ravens Hall of Famer Ed Reed. He participated in several school activities, including track, where he held the county record for 8th grade in the shotput, as well as basketball, piano, and the Calculus project each year of middle school. He continued to make big plays, all while maintaining at least a 3.5 GPA. He continued to grow in height and became a dominant force on the field. Aaron quickly began to shine and was the epitome of a student-athlete. He loved to dance and make Tik-Tok and YouTube videos. He developed an interest in modeling and acting and graduated from The Barbizon School of Modeling in 2019.

Aaron attended West Orange and Ocoee High schools before deciding to take his academic and athletic abilities to Nationally Ranked Powerhouse St. Frances Academy in Baltimore, MD.  While only there a short time, he made a lasting impression on the administration, his coaches, classmates, and teammates. He developed special relationships with Coach Messay, who he lovingly called Meathead, Mrs. Brickhouse, who became a mentor to him, and his head Coach, Biff Poggi. During the 2020/2021 school year at St. Frances, Aaron maintained a 4.2 GPA, served as Student Government Vice President, a peer mentor to his teammates, and was virtually inducted into the National Honor Society in January 2021. He was a part of the Under Armour Future 50, and committed to play in the Under Armour All-American High School game. He was a 5-star athlete, ranked #4 DE in the nation, #1 DE in the state of Maryland, and had received more than 30 scholarship offers from D-1 colleges.

Aaron gave his life to God in early 2014 and joined River of Life Christian Center, where he was active in the youth program until God called him home on the morning of April 26, 2021. He had a close bond with his youth pastor and loved attending youth bible study on Thursdays.

Aaron was an amazing young man who shined in the classroom, on the football field, and in life. He had a great personality and sense of humor and was loved by everyone whose path he crossed.