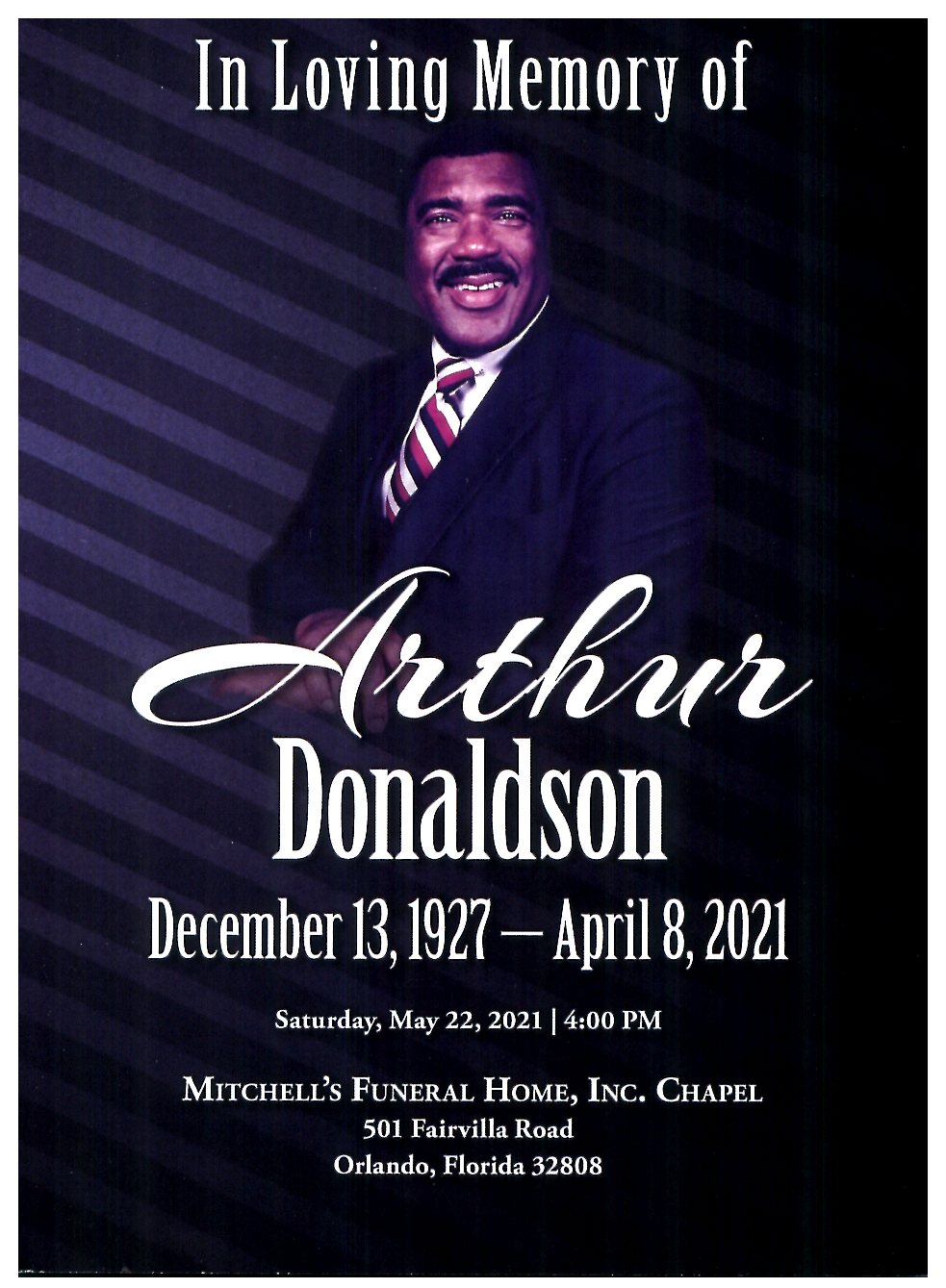 Arthur Donaldson was born on December 13, 1927, in New York City to the late George and Florine Donaldson. His father, George, hailed from Antigua, British West Indies, and his mother, Florine, from Jacksonville, Florida. He was preceded in death by his brother, Desmond Donaldson. Arthur received his education from the New York City School System, where he attended DeWitt Clinton High School.

Arthur joined the United States Navy at the tender age of 17. He traveled the world for two years during World War II, in submarine service, as an STM2/Steward’s Mate 2. Upon his return from the Navy in 1947, he married the former Anita Richard (deceased).  From that union were born two daughters, Irene “Cookie,” deceased (Charles “Chuck”) Anderson, and Cristal (Mike) Jones. Irene’s children, Charles, Tiffany, Simeon, and Amber, in addition to Cristal’s children, Eugene and Velvet Washington, were his beloved “Grands.” Arthur also was the “Encouraging” father of Barbara, Charlene, and Cecil (Nola) Fisher.

In 1970, Arthur met the former Madeline Frasier, and they married on May 29, 1976. They celebrated their GOLDEN anniversary in 2020 and were looking forward to their 51st on May 29th of 2021. The union of Arthur and Madeline gained a beloved son, Garry V. Frasier, Sr., and cherished grandchildren, Dr. Tiffany L. Frasier, Garry V. Frasier, Jr., and devoted sister-in-law, Yvonne (Robert, deceased) Taylor.

Arthur and Madeline relocated to Orlando, Florida, in 1980 after he retired from the New York Transit Authority as a motorman and bus driver for 21 years. He drove and served as a dispatcher for an additional three years for Disney World and other companies before fully retiring from the transportation industry. Upon his retirement and throughout his life, Arthur enjoyed travel by boat and plane. Whether cruising the open seas or flying to Spain and beyond, Arthur enjoyed life! He enjoyed telling jokes with his grandchildren and great-grandchildren and was our beloved “Grandpop or Poppi.” To others, he was known as Pastor Art or “Abba.” Whatever you knew him as you were blessed to know him, and he touched your heart.

Arthur Donaldson was a “man’s man” and demonstrated it by dedicating his life to God and becoming an ordained minister. He earned his Associate of Theology degree in Biblical Studies. He served as a Co-Pastor in Staten Island, New York. Upon moving to Orlando, Florida, Arthur served as Pastor of Maranatha Faith Fellowship and Associate Pastor of Resurrection Life Center, where he counseled many and gained a large spiritual family.

All that knew him knew his beautiful singing voice, full and boisterous laugh, undeniable wisdom, and love for his wife, family, and extended family. You also knew him to say, “My Redeemer Lives.”

Arthur received his call to come home on Thursday, April 8, 2021. Arthur leaves a truly devoted wife, children, and grandchildren.  He also leaves behind a host of great-grandchildren, nieces, nephews, cousins, other relatives, and friends.