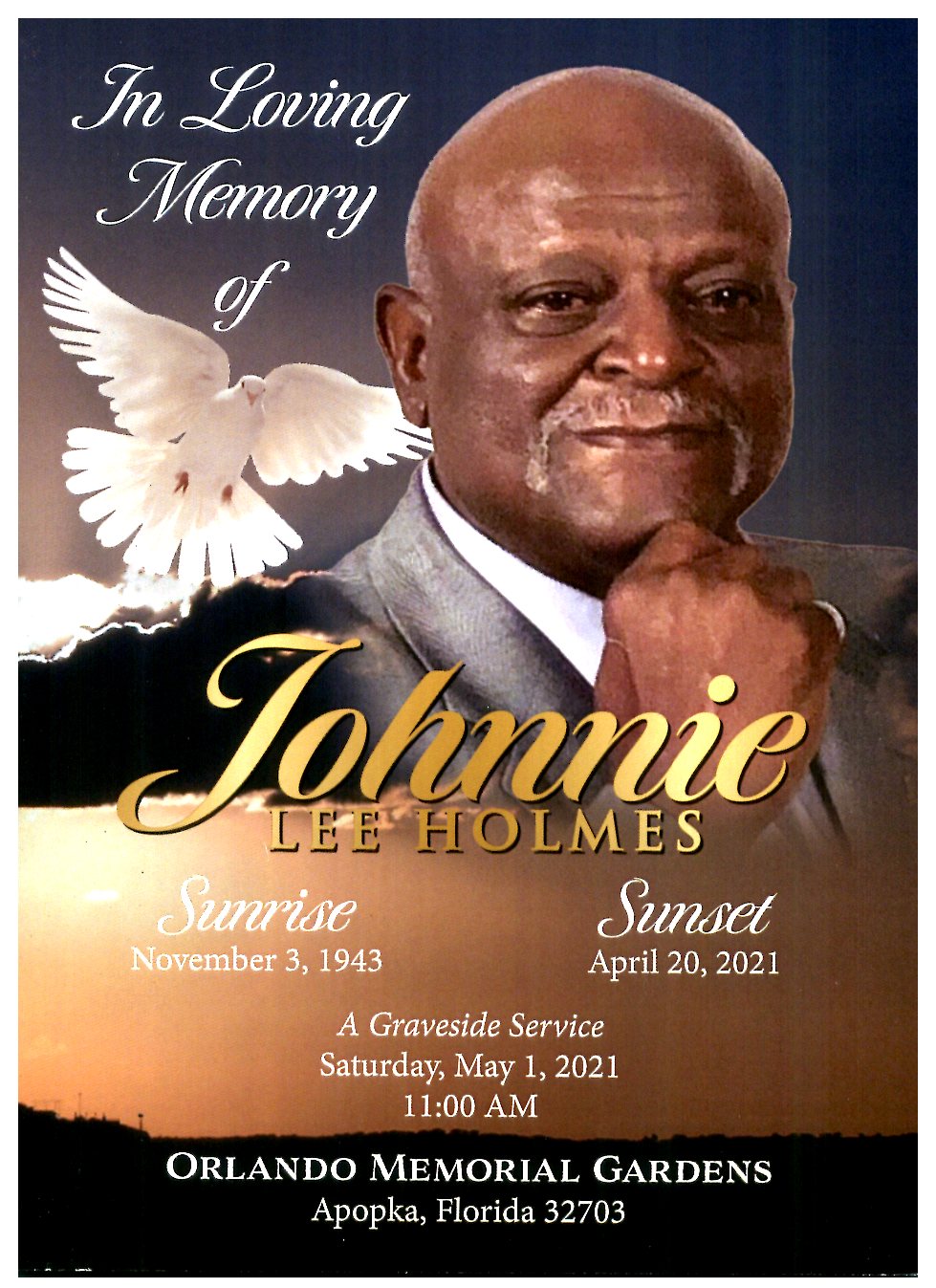 Mr. Johnnie Lee Holmes was born November 03, 1943, in Pooler, Georgia, to Mr. Remer and Mrs. Thelma Holmes. He was the second of seven children.

Johnnie was educated in the public school system of Chatham County and is a 1962 graduate of Tompkins High School, where Mr. Luten was the principal.  He played football for four years under the leadership of Coach Joseph Turner, Coach Paul Russell, and Coach Alexander Vaughn Speed. In 1959 they won the City Championship.  In 1959 and 1961, he was chosen to play on the All-City Team.  Johnnie won the Lineman of the Year Award.  His teammates became his family, and they loved each other.  They were dedicated to the game of football.  This was a serious time in the players' lives, and Johnnie became “captain of the defense team.” Due to his hardnosed play and consistency, he was a defensive giant and played his heart out alongside his teammates; they were awesome, dynamite, and a force to be reckoned with . . . THE MIGHTY WOLVERINES!

Johnnie earned a four-year scholarship to attend the Florida A&M University under the legendary Coach Jake Gaither.  He remained dedicated to the game and won Lineman of the Year Honors in 1964 and 1965.  In 1965 he was selected to play in the Blue-Gray Classic in Montgomery, Alabama; he made several key tackles for the south in the game.  He was one of the first blacks selected to play in the Blue-Gray game.  Johnnie was a high draft pick for the Detroit Lions of the National Football League but signed with the Miami Dolphins of the American League instead.  He later played for the Orlando Panthers of the Continental Football League.

Johnnie married the love of his life Mrs. Claretha Bowers Holmes, a union of 54 years.  After 36 years of teaching, Claretha retired and became the official “Navigator” of Sun Country Distributor, where she rode with Johnnie on the truck until 2020.

Johnnie gave his life to God at an early age.  He was baptized at the South Valley Baptist Church in Pooler, GA.  The family relocated to the Rosingnol Hill Community in Garden City.  He attended the St. John Baptist Church in Orlando, Florida, where he was ordained as a Deacon in 2008.

Johnnie owned and operated Sun Country Distributor Trucking Company with his wife, Claretha.  Johnnie’s hobbies were raising his german shepherds and attending his flower garden. This was his private place to sit, pray as well as a place of tranquility as he watched his flowers bloom and grow.  Johnnie is an awesome, loving, humble, and gentle giant who found solace in his relationship with God.  His belief was that if you pray, and pray earnestly, with God all things are possible, “Matthew 19:26.”

The Lord, in His infinite wisdom, deemed it timely to call our beloved to his eternal resting place on Tuesday, April 20, 2021, at Advent Health Hospital. His departure is a deep and personal loss to our family and many friends, and he will be greatly missed by us all.