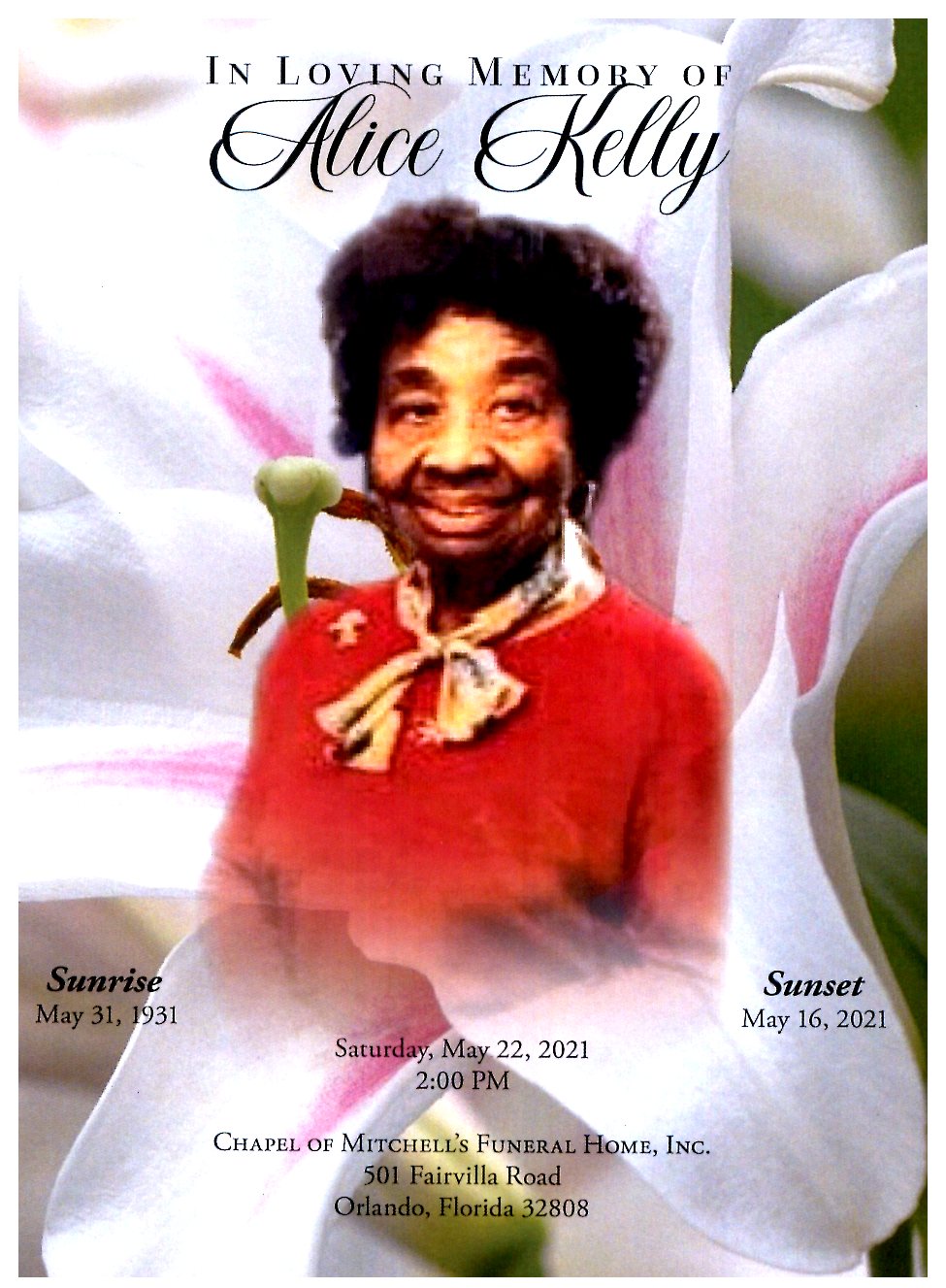 The family is requesting a Private Service. Thank you.

Alice M. Kelly was born in Quitman, Georgia (Brooks County) on May 31st, 1931, to Sam Spencer Jones and Georgia Lathrop Jones.  She graduated from the “old” Brooks County High School in 1945.  Because of her father’s job at the Seaboard Coastline (now Amtrak), she also lived in Valdosta, Georgia. She would later move to Sanford, Florida, where she would begin the longest part of her life in Central Florida.  After her mother's death when Alice was 15, her rearing was completed by her Aunt Mary Jenkins Lathrop and her Uncle Charlie Lathrop.

Alice attended Savannah State College but later moved to Orlando, Florida, where she met the love of her life, Otha L. Kelly.  She would later marry Otha on November 10th, 1951.  Later, Alice graduated from Bethune-Cookman College with a bachelor’s degree in Elementary Education in 1964. She became a classroom teacher in the Orange County Public School System (OCPS), starting with an internship at Azalea Park Elementary School under the mentorship of Mrs. J. L. Fagan. From there, she would become a teacher in her own right at Callahan Elementary School in downtown Orlando. In 1969 during desegregation (a time known as “the cross-over”), Alice was reassigned to Lake Weston Elementary School, where she would finish out her career as a 4th and 5th-grade classroom teacher for a total of 36 years.  Alice always wanted to be a teacher and could not stop at retirement. She worked another 14 years with OCPS as a substitute teacher for a total of 50 years, touching the lives of young people by developing their minds.  Her beloved husband Otha preceded her in death in 1986, in their 35th year of marriage.

Alice loved God and loved attending church, especially her childhood church, Beulah Baptist in Quitman, Georgia.  She and her husband were founding and charter members of the Washington Shores Presbyterian Church, which they helped establish in 1957.

Alice was a kind, loving, and gentle person who was also a force to be reckoned with when she was determined to accomplish something or protect those she loved. With her salvation in Christ secured, she leaves behind to celebrate her victory over the challenges of this life: her daughter – Cassandra L. Giles (Alvin); and her sons – Ronald E. Kelly, Roger C. Kelly, Sr. (Gwen), Ryan S. Kelly, Sr. (Kim), and Raymer O. Kelly, all of Orlando, Florida. Alice also leaves behind her beloved sister and closest friend – Mary J. Stoves of Orlando, Florida, 15 grandchildren, 12 great-grandchildren, and many other relatives and friends.