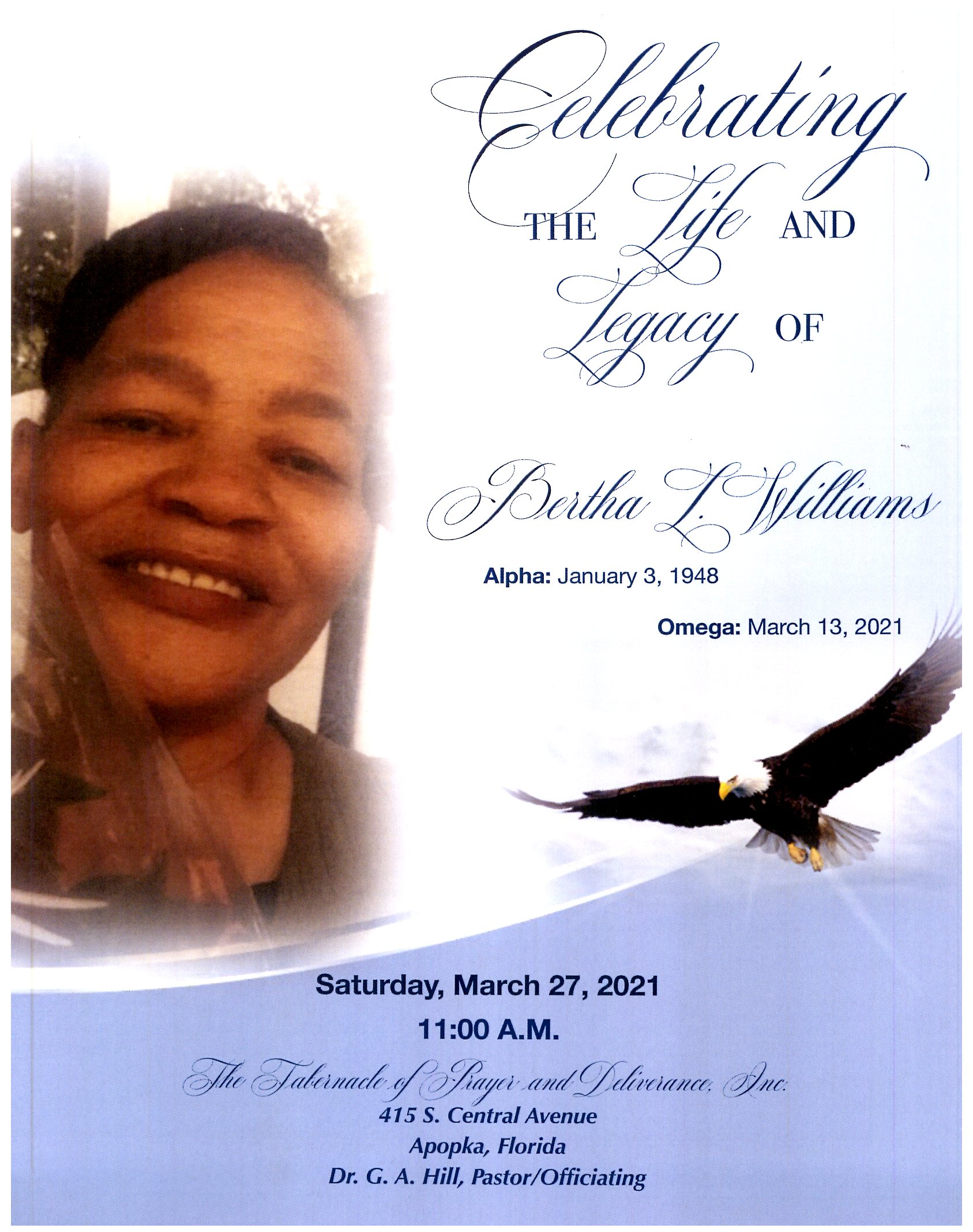 “They that wait upon the Lord shall renew their strength; they shall mount up with wings as eagles; they shall run, and not be weary, and they shall walk, and not faint.” ~ Isa. 40:31 Bertha L. Williams, affectionately known as “Butch” was born on January 3, 1948, in Philadelphia, Pennsylvania to the late Reverend Edward Thaddeus Williams, Sr. and Evangelist Mildred Louise Gunn-Williams. She departed this life suddenly, on March 13, 2021. Education Bertha attended Orange County Public Schools in Orlando, Florida. Of those she attended were, Washington Shores Elementary and the legendary Jones High School. A Life Well Lived In 1965, Bertha married James Andrew Belk in Orlando, Florida. In 1969, she became a backup dancer for a popular group of the time: Archie Bell and the Dells, famous for their hit song, “Tighten Up”. She later traveled and danced alongside James Brown from 1975-1978. When she returned from touring, she danced with local musicians, Buddy McKnight, and the Soul Brothers at the Quarter Back Club on Church Street in Orlando. Career Bertha later attended culinary school and upon graduating, she began working for major corporations to include the Orlando Marriott, Morrison’s Cafeteria, Piccadilly Restaurant, and Sizzler. After many years, Bertha devoted her time, energy, and love into being a caregiver for children with whom she watched grow from babies to thriving adults. Walking By Faith In 1979, Bertha gave her life to Christ and joined New Jerusalem Church of God in Christ under the leadership of the late Bishop R. B. Hemingway, Sr. in Orlando, Florida. Years later, she joined and would remain at the Tabernacle of Prayer and Deliverance, Inc. in Apopka, Florida under the leadership of Pastor G. A. Hill. Bertha L. Williams was preceded in death by her Parents: Reverend Edward Thaddeus Williams, Sr. and Evangelist Mildred Louise Gunn-Williams; and her three Sisters: Brenda Joyce Young, Marion Denise Hayes, and Gloria Jean Johnson. She is survived by her two Daughters: Terry Williams (Ben) of Orlando, Florida and Agnes Belk of Jacksonville, Florida; two Sisters: Barbara Ann Miller of Morrisville, Vermont and Janet M. Jones (Arthur “AJ”) of Jacksonville, Florida; one Brother, Edward Thaddeus Williams, Jr. of Chicago, Illinois; four Grandchildren: Tawana Chaney (Clinton), Kimberly Palmer (Larry, Jr.), Antrelle Belk, and Khaliah Boyd; six Great Grandchildren: Teriq Chaney, Nathanael Chaney, Vanessa Bowen, Larry Palmer III, Ava Palmer, and Agape Belk; and a host of nieces, nephews, other loving relatives, and friends. R