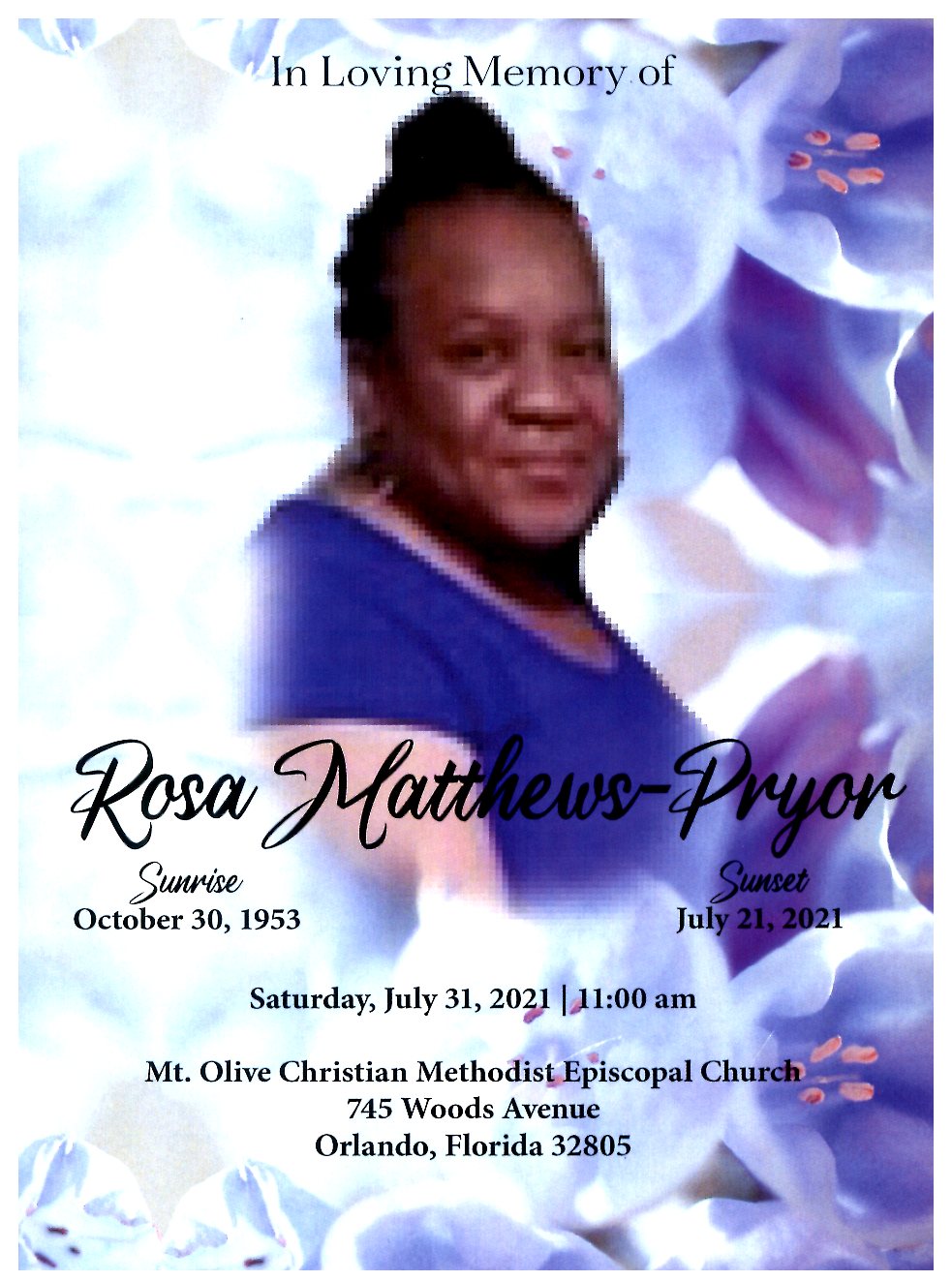 Sis. Rosa Lee Pryor was born in Orlando, Florida on October 30, 1953 to James and Katie Matthews.  Her formal education began in Orange County Public Schools at Holden Street Elementary. She graduated from Jones High School ‘Tigers’ Class of 1971.  She completed her undergraduate work at University of Central Florida where she received her Bachelor of Arts in Elementary Education.

Sis. Pryor was a prominent educator in the Orange County Public School System for 45 years. She was an exceptional teacher and leader! She was such a beloved and great teacher that she was nominated teacher of the year five times in a row. She received numerous awards to include the High Impact Teacher by the State of Florida. She was truly gifted in the art of delivering knowledge to a huge variety of students and parents individually, custom-wrapped methods that worked for each one of those divergent personalities. Every mind was important to her and she felt it worth her time to search for just the right keys to open that mind. When she found those keys, she used them effectively to make learning fun, exciting and pleasurable for each child and parent. She was the all-time favorite! She was the best at everything she did in her classroom/school. Due to her hard work and service, a tree was planted in honor of her name at Catalina Elementary School.

Sis. Rosa Pryor accepted Christ at an early age and has been a member of Mount Olive CME Church for over 40yrs. She is a natural giver and caretaker and has served in many capacities on many boards to include the Acolytes, Steward, Missionary Society, Stewardess (President), Usher, Trustee, Margarette C. Johnson Choir, and Christian Board of Education (Director). She established the Special Event Team (S.E.T.). The SET team has consistently sacrificed, uplifted, and sustained the church through many experiences and has been the pillar of strength in the church and in the community.

What put Sis. Rosa in a league of her own was an unmatched level of creativity, kindness, a truly loving spirit, and the heart of an angel. She could instill a measure of God-fearing confidence in those who had absolutely no confidence. This anointed teaching angel could calm a struggling person with unscripted encouragement from a very natural ability that was rarely seen in others.   Out of all her accomplishments in the church and the community, the one thing she was most thankful for was her relationship with God.

She was preceded in death by her parents, James and Katie Matthews and eldest sister Mildred.