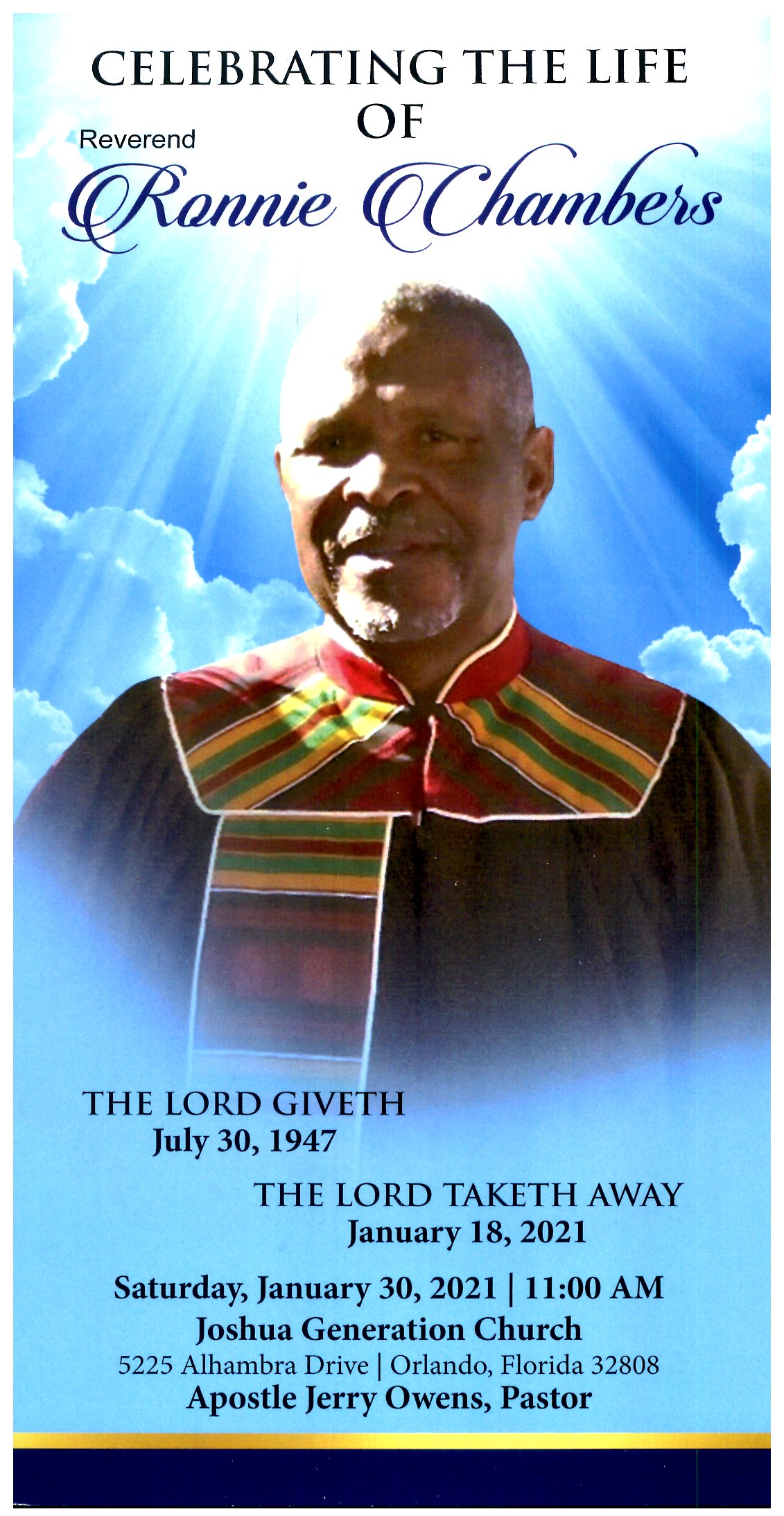 Ronnie Chambers was born on July 30, 1947, to the late Pauline Chambers and the late Johnny Mellow, here in Orlando, Florida. At the age of 6, he and his family relocated to Oakland, California, but by the time Ronnie was 10 years old, his infant brother Johnny, and his mother passed away. A young Ronnie moved back to Orlando to be reared by his maternal grandmother, the late Sarah Chambers.

He attended Orange County Public Schools, which included the great Jones High School. His grandmother was a strong disciplinarian. Soon after he reached adulthood, he decided to enlist in the U.S. Army. It was during this time that he met and married Bonnie Jean Collier, the love of his life.

He went to work in the construction industry and became a supervisor for a company called J Hayes and Sons. When the opportunity presented itself, Ronnie joined the City of Orlando Parks Department, later retiring after 17 years. Then in 1988 he started trucking.

Ronnie loved his family and God strategically used his trucking prowess as a way to help him move his family forward for generations to come. You see, he and Bonnie were blessed with 7 sons that they loved dearly. Ronnie was a hands on father that taught his sons everything they needed to know to become strong God-fearing men.

In 1996 under the pastorate of the late Reverend Wiggins of New Hope Missionary Baptist Church of Orlando, Ronnie accepted the call of God on his life to preach the Gospel of Jesus Christ. He later started a home based ministry called “In my Father’s House.”

Pastor Chambers loved people, he had a keen sense of humor, and was always interested in the character of the people God placed in his life. He never met a stranger, and his boys were everything to him. So, in 2007, when he had to bury his son, Christopher Chambers, needless to say that was one of the hardest times in his life.

Pastor Chambers was always quick to try and meet the needs of others. He stood solid in his faith, and even built an umbrella in the backyard for him and God to have their private time together daily. He was a man of character, and everyone knew what he believed in, and what he stood on.

He enjoyed his home, loved cooking, and had a green thumb that was second to none. He loved working with his hands constructing things, and was simply a humble and cool dad that did everything he was suppose to have done as a father.

Pastor Ronnie Chambers was preceded in death by both of his parents, his grandmother, one brother, and one of his seven sons, all before mentioned above.